At the time of writing, Supercontinent Ltd has been released for about five hours on itch.io, by Deconstructeam. It has been developed in about 72 hours for Ludum Dare 36.

As a fan of their work, when I noticed their tweet about the game’s release – also noticing that Ltd recalls my internet handle LostTrainDude – I couldn’t help but download it and throw myself into playing.

Also, being a sort of cyberpunk adventure developer myself, I really felt the need to and I wasn’t disappointed.

Deconstructeam knows how to deliver a well polished game, no matter how long it actually is. The great thing is that they managed to create a really interesting world using mostly dialog and a pinch of environmental storytelling.

Nothing revolutionary, of course, but: interesting? Yes, indeed!

Just looking the above screenshot you can notice how some neon lights, some colors, the font and the rain, when put together, they all speak “cyberpunk” – or at least whisper “a little dystopia”.

And yes, the game features a chilly synth-based soundtrack, composed by fingerspit, who also composed the soundtrack for Deconstructeam’s Gods Will Be Watching

Last but not least, the game involves hacking – which is very cyberpunk indeed.

A different kind of hacking

The thing is, it’s not the hacking game you may think of.

No servers to breach, no cameras to shut down; just phone calls to make. Old fashioned phone calls like in the ’80s and ’90s.

So old fashioned that not even the main character knows how they work.

The game mechanics are pretty simple – type in phone numbers, impersonate a character to steal information from another one, fill in the blanks and repeat – yet they trigger all there is left, which is dialog.

Still, you don’t really spend much time without interacting with the game. In fact, dialogs are not very long but reveal a lot and they work pretty well as a narrative device here.

In just a bunch of phone calls you will only find out about few characters that live this world. Still, you can have quite a nice grasp over how it could feel to live in the 2100s, on the very last day before the last Landline Network shuts down for good, waving goobye to almost three centuries of communication (Gmail still exists, though).

One may say that Supercontinent Ltd ends just when things start to get interesting. Personally, I want to look at it as a clever way to cope with the deadline while delivering enough plot for your imagination to do the rest.

One room can be enough to tell a story

So yes, trivial as it may be, one room can be enough to tell a good story in a videogame, even if the game we are talking about is not Her Story.

When gameplay’s flow is constant, well placed dialogs can do much of the work and environmental storytelling can be a nice filler. 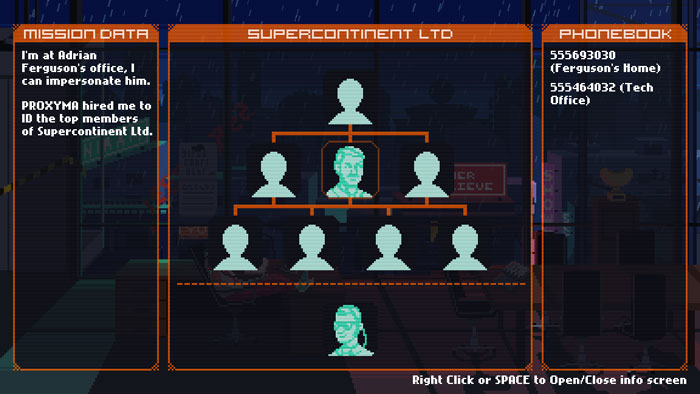 Of course the “One Room Adventure Game” is not a new thing. Think of all the so-called Escape Room games, for example, those you used to play on free flash games websites in the early 2000s. There are even real-life Escape Rooms!

Also, escape room puzzles are common in point and click adventure games. You can find really worthy examples in my analysis of Technobabylon Puzzle Design.

It’s also worth noticing that the Adventure Game Studio community, every now and then, even hosts a one week long development competition (One Room One Week, OROW in short) to develop games not very different from the one discussed here.

And now a question: if one room gives you enough room (pun intended) to build a huge slice of a world, should we build our game worlds room by room?

2 thoughts on “Supercontinent Ltd: a whole world in a single room”