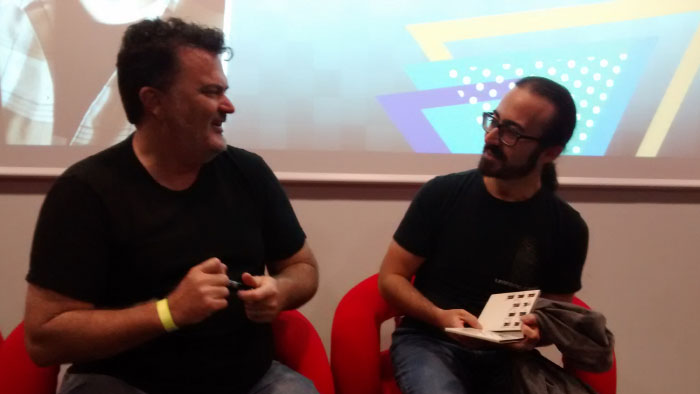 I think I’m going to change the game’s name later on.

In the last weeks I spent some time playing around with Chris Crawford’s theories for Interactive Storytelling, based on the three lectures he recorded for his Encounter Editor for Siboot.

Also, I went to an event in Milan where Tim Schafer gave an hour-long interview, asked him a very specific question about Grim Fandango, then met him for about 30 seconds as he signed my copy of Full Throttle.

X greets Y. How will Y greet X back?

I made a little experiment about relationships between characters in adventure games. Not very sophisticated, probably, and most likely broken, but here goes.

I set up a simple event where the main character interacts with another. A simple greeting. X greets Y. Now, how will Y greet X back depends on three elements:

A little explanation on the last element. Basically I decided that if Y has affection for X and X, quite unexpectedly, is very rude to Y, then Y momentarily puts the affection aside and just uses what we could call “manners”.

If Y is a good person (positive Bad_Good value), then the answer would be something like: “Whoa, why did X do that? Ok, you know what, maybe it’s just a bad day or something upset X. Let’s not rush to conclusions“.

This is a very basic experiment, and it’s based on Chris Crawford’s work in Interactive Storytelling. Although I think I’m using this not in the same way he intended to, I still find it an interesting enough system to build better characters and gameworlds.

Everything happens behind the scenes, of course, but I wonder if characters’ behavior can still emerge and be tangible to the player, eventually.

The way such events are structured (in other words, which elements are involved in the outcome) is purely based on my own perspective on such events, which should be the way in which this system lets me express my own creativity.

You can find Chris Crawford’s three-piece lecture about this system on YouTube:

Getting to see Tim Schafer

I attended this year’s Milan Games Week to meet Tim Schafer, responsible of thousands of hours of my own entertainment.

The first videogame I ever bought with my own money is Full Throttle and Grim Fandango is one of my favorite games. 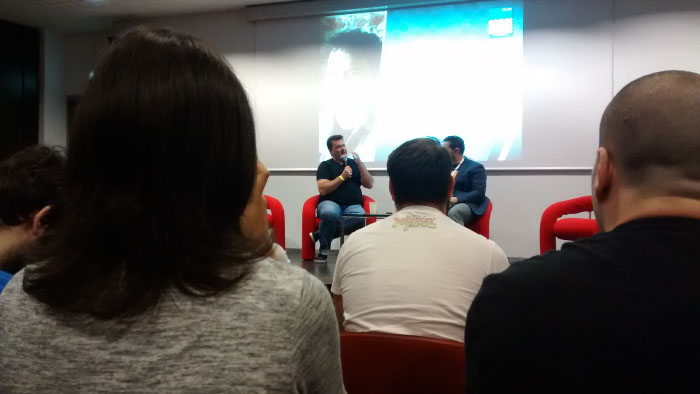 I asked him a question about Grim Fandango.

My question was about the poems recited at the Blue Casket: did he remember writing them? Yes, he did. He actually answered that he would write those poems\dialog choices both using them to express stuff that he would not normally say out loud and use them as hints for current or later puzzles.

He thanked me for the question and I sat down again, flattered.

I always loved the role that poetry had in that game, especially at the open mic in the Blue Casket. I think I have been using poetry in my own games because of that very scene in Grim Fandango.

At the Blue Casket, Olivia Ofrenda would recite her poems and I really love how they would perfectly fit the game, create an even better mood and also support the story development.

I especially love the very last one she recites, which also wraps all that happened in the game and all that still has to come. It goes like this:

With bony hands, I hold my partner.
On soulless feet we cross the floor.
The music stops, as if to answer
an empty knocking at the door.

It seems his skin was sweet as mango,
when last I held him to my breast.
But now we dance this grim fandango,
and will four years, before we rest.

After the interview he gave, and the Q&A session, it was time for autographs and pictures session.

With me, I had my original Full Throttle copy in the unfortunately awful CTO budget edition. On the top of that, a bottle of water opened up in my backpack and the already-awful box got wet. I was furious. 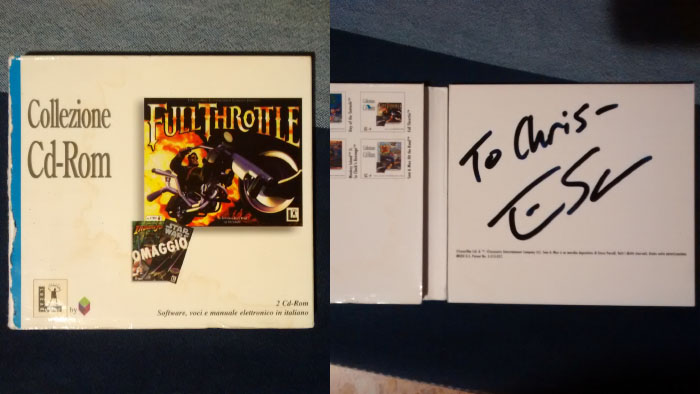 Still, I managed to get it signed (“I have never seen this edition” – “Yep, it’s a really crappy one, but still: it’s the first game I ever bought with my own money!”).

And I even have a picture to show for posterity! Look at me and Tim laughing like old friends who never met!

I also laughed hard at the fact that the event issued pictures of him to use for autographs. They looked like holy prayer cards. It was hilarious.